Home Trending ‘Fighting Bait’ Dog Who Lost Half Her Face Is Unrecognizable After Finding...
Trending 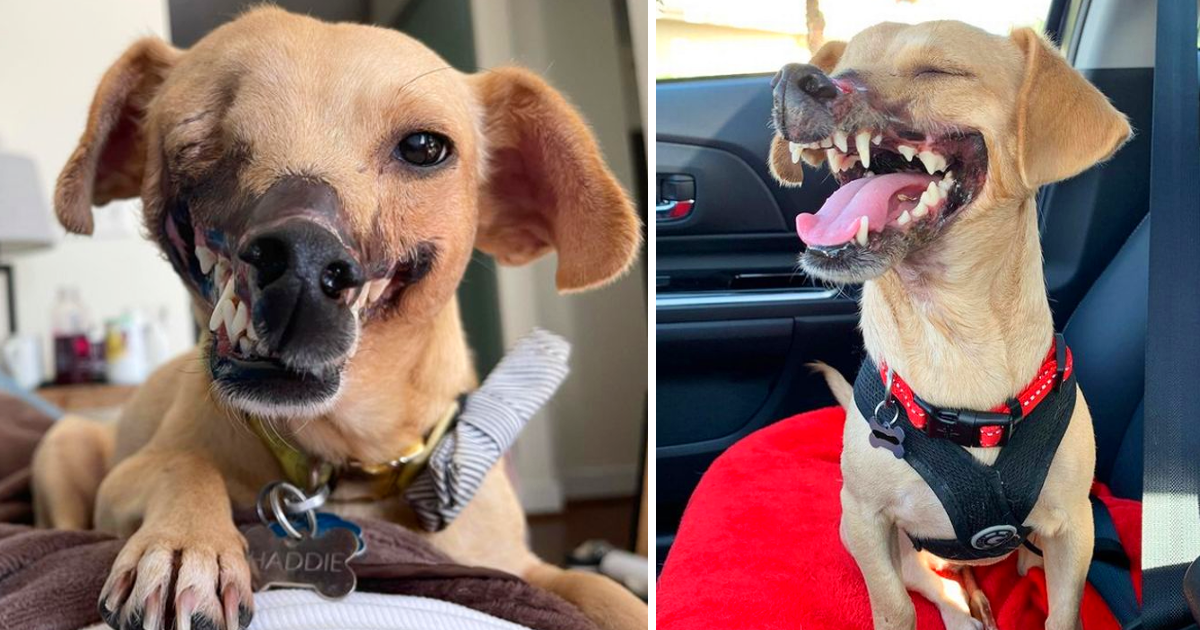 After being relentlessly attacked by fighting dogs in an illegal operation, “pirate dog” Haddie is unrecognizable.
Her skin was “rotting” and falling off, so she had to have a lot of it removed, leaving her with only one eye.
Erin Williams, 36, was drawn to her unusual appearance, and now the pair live safely and happily together in Washington D.C.
Haddie has overcome her fear of other dogs and now enjoys nothing more than playing with the pack in her neighborhood park. 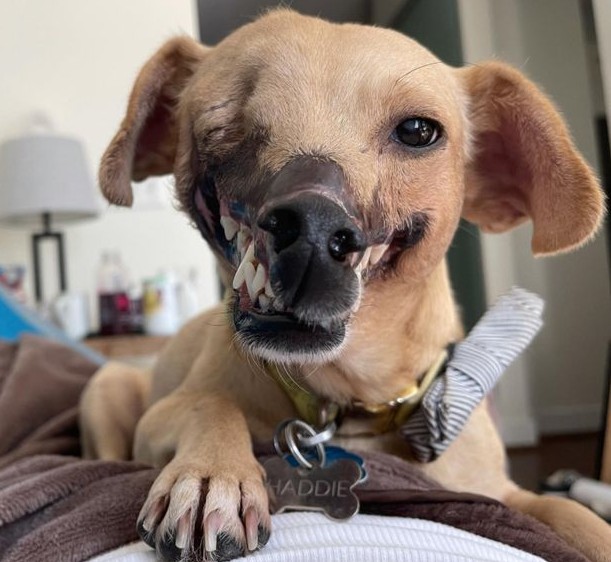 In August 2020, Erin came across Haddie on the online pet website petfinder.com and couldn’t stop thinking about her.
A good Samaritan rescued Haddie from a dogfighting ring and brought her to Mutt Scouts in South California.
The two-year-old puppy was injured all over, but the worst was on his face.
Her injuries and temperament were attributed to her being used as a “bait dog,” according to a doctor. 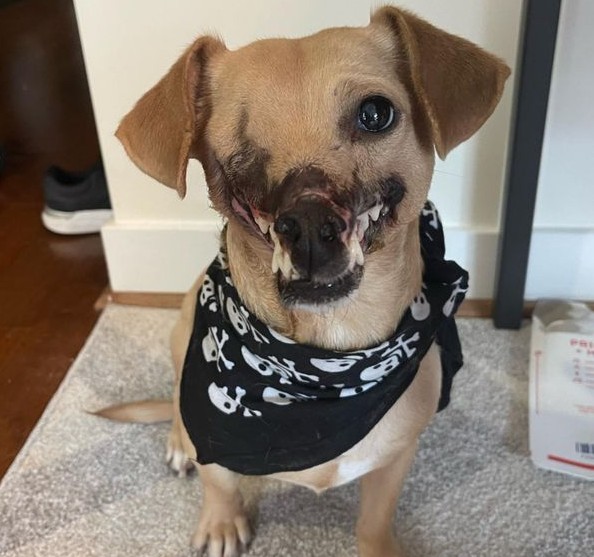 “We don’t know much about her specific experience in that world,” Erin explained, “but it’s likely that the dog fighters forced their ‘fighting dogs’ to attack her relentlessly to ‘train.'”
“In these situations, all the dogs are victims.”

Erin and Haddie became inseparable after Mutt Scouts paired them up and transformed each other’s lives.
Erin didn’t know Haddie’s real birthday, so she made one up based on Dolly Parton’s January 19th birthday. 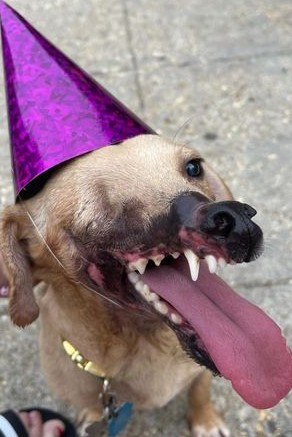 Haddie was described by Erin as “sweet and goofy” at first, but she was terrified of other dogs.
Hearing a dog bark or seeing another dog was enough to cause her body to shake uncontrollably.
Erin enlisted the help of a dog trainer to help Haddie overcome her deep-seated fears.

“We’d feed her hot dogs and introduce her to a dog across the park,” she explained. “Then we’d get a little closer and closer until she associated dogs with safety and teats.”

“In the end, I believe her personality made it possible.” She’s extremely bright and resilient, which I’m sure aided the process.”

Haddie now enjoys running around with other dogs in her neighborhood park, and when she’s excited to go outside, she does a “funny little hop.” 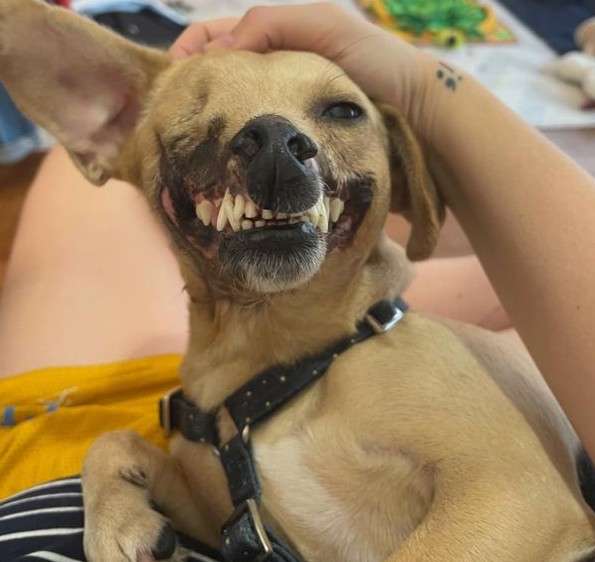 “She’s a social butterfly,” says the narrator. “She adores people and expects everyone to scratch her ears,” Erin explained.

Haddie has to wear medicated sunscreen on her snout and scars whenever she leaves the house, but other than that, she’s just like any other dog, albeit with a slightly different appearance.
Strangers naturally stare and ask questions about the unusual dog, but Erin says the reactions aren’t as bad as she had feared. 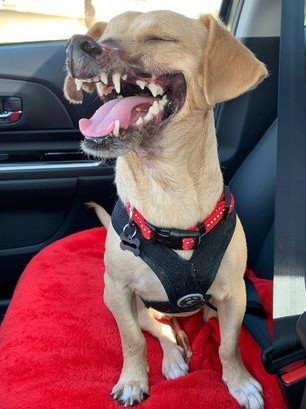 “Most people respond with warmth and friendliness. Erin explained, “Her joy for life is so obvious that it would be difficult not to be.”

“Every now and then, we get a rude remark or an uneasy glance, but they’re thankfully few and far between. Those people will never know her, so it is their loss.”

Erin’s life has also been transformed by the one-of-a-kind dog, which has helped her cope with depression.
“Haddie is always there to remind me that it’s time to go for a walk, and she’s always up for a free afternoon napping,” Erin explained. 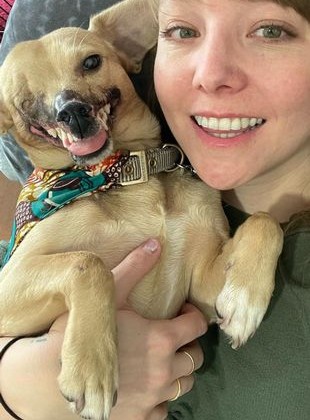 Erin has created Instagram and TikTok accounts for Haddie, and says her followers have shown her just how “unbelievably kind the world can be”.

“The people I connect with there are supportive and thoughtful, and I’m so grateful,” Erin said.