Home Rescue He just wags his tail at anything and everything, despite having over...
Rescue

He just wags his tail at anything and everything, despite having over 220 shotgun pellets lodged in his body

Meet Buck! We knew he was shot multiple times with a shotgun, but what we didn’t know was how incredibly sweet this boy is.

He just wags his tail at anything and everything, even with a hole in his face which was inflicted by a human.  A dog’s resilience is truly amazing.

“We took him to Vergi 24/7 to be examined.  They did repeat x-rays so a radiologist can review them and got him started on IV fluids, antibiotics and pain meds. Some of the skin on his face is already dead so they need to do some debriding, and he will be sedated for that.”

“We hope whoever shot this sweet boy somehow sees that he’s alive, safe and sound now! “

“For whatever reason someone tried to destroy this dog with a shotgun, they obviously failed. And we will celebrate that failed attempt by giving Buck the best new life and the best chance at a full recovery.”

Even though we will likely never find the one(s) who shot this defenseless dog, we can get Buck justice in other ways, like by making sure this never happens to him again.

Buck was shot and has over 200 gunshot pellets all throughout his body, with majority being in his face. The Vet don’t think he needs any major facial reconstructive surgeries, but do feel he could benefit from some minor procedures to help bring tissues together. 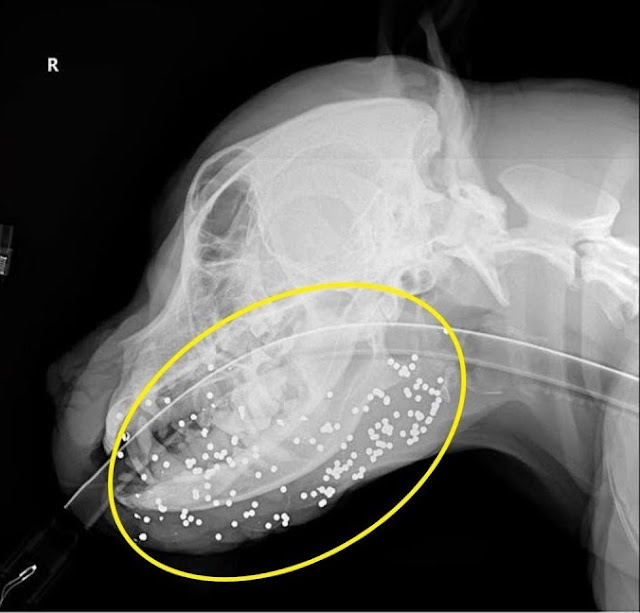 The biggest concern is his lip and that it may not fully grow back normally.  He’s settling in well at his foster home! Thanks all for the support and love!

After 20 days and despite someones failed attempt at trying to destroy him, he is doing amazingly well. His face is healing up well and he’s still limping quite harshly, but he acts as if nothing ever happened.

Fortunately, this traumatic event didn’t phase Buck, and that’s a testimony to how strong and tenacious dogs can be.

The initial plan was to wait 2 weeks to see if he had muscular lameness, or if there could’ve been a pellet lodged in his joint.

“His limping should have improved but since it hasn’t, We will probably be doing a CT scan this week. If a pellet is stuck, he could potentially need surgery.”

After more than 24 days Buck’s face continues to heal well. Soon you won’t be able to tell he was once shot in the face with a gunshot. He returned to specialists this week who determined a CT scan was not needed,  at this time but they’re still keeping an eye on his limping and  expect it to improve.

He’s now getting ready for a neuter and heartworm treatment. Two steps closer to finding his forever family!

Day 30: Buck has been getting so many packages of love!

The toys have made him sooo happy even though he’s quick at destroying them!

Buck’s about to start heartworm treatment and has a family lined up and waiting for him to finish treatment.

More than four months later, Buck recovered though, and he’s stronger than ever now.  He’s prepare for his trip to his new happy family.

Check out his big smiles! Thanks all for your support!