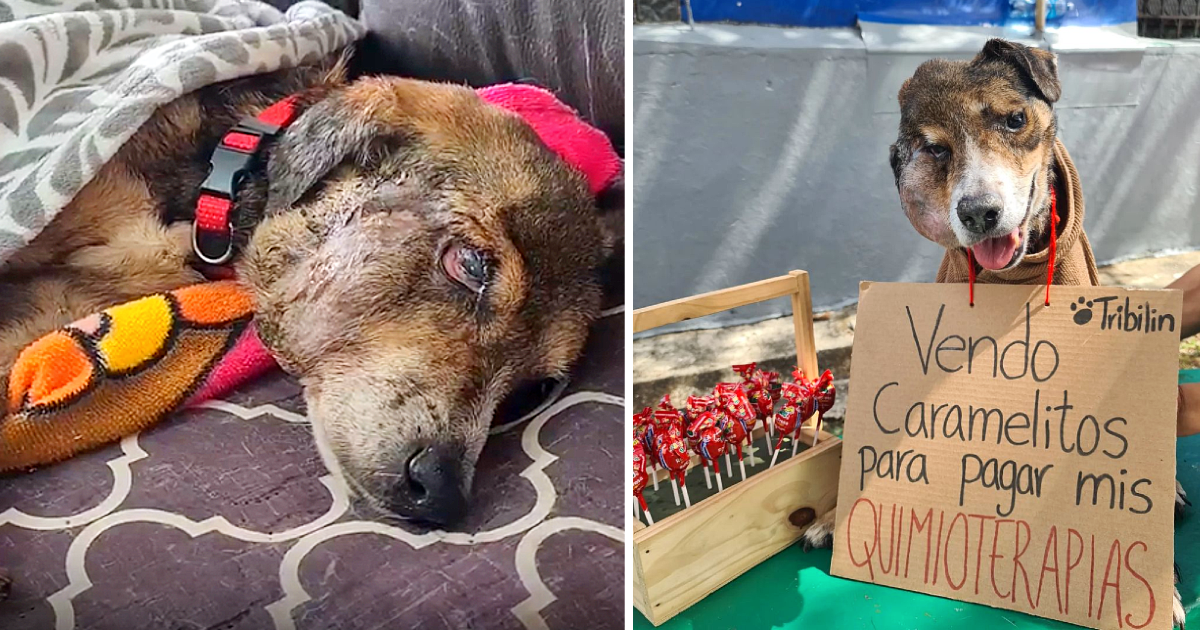 The dog was rescued by an animal welfare organization, which provided him with a home and appealed for help to pay for his medical treatment via social media.

The story of “Tribilin,” a dog from Panama who has sarcoma, a type of cancer that originates in tissues such as bones or muscles and necessitates chemotherapy, became known thanks to social media. He was rescued in February, according to the Fundación Defensores de Animales de Panamá.

“My name is Tribilin, and I have a type of cancer called sarcoma in my face. “Don’t be afraid to see me, I’m not a monster, I’m just a sick puppy,” “Tribilin” is seen posing next to a sign that reads “I sell candy to pay for my chemotherapies,” according to the Instagram post “..

“This Foundation rescued me a month ago, and now I’m finally ready to receive chemotherapies, which are my only hope. My tumor has already been surgically removed, but it is too large “the article adds “Could you please give me a paw?”

His story, as expected, went viral and touched a large number of people online. The dog’s post not only went viral, but it also raised enough money to get him into a veterinary clinic for treatment.

The Foundation announced that “Tribilin” had been able to receive his first chemotherapy treatment after several days. He’ll also be in the hospital for three days because his kidneys have been messed up and he’ll need to take a number of medications.

They are now awaiting word from the doctors, who will determine when he will receive his next round of chemotherapy based on the state of his organs.

His caregivers informed him a few hours ago that the dog had received his subcutaneous hydration and that the procedure had gone smoothly.

A boy and his mom dressed up as clowns to give his sister one last show before she passed away.

“Today is my mother’s birthday, and I wanted to share the story behind this old photo, which never fails to move me.” This is how a Twitter user identified as Carlos Spndola (@Carlitospindola) describes a photo in which he appears with his mother performing at his older sister’s birthday party, who would die shortly after due to “a terminal illness at only 12 years old.”

Spndola recounts how her sister – whose name she did not reveal in her emotional story – “had been struggling for years with a progressive disease” in the viral Twitter thread she started on March 15, 2022. “Days before her 12th birthday, the doctors told her she only had a few days to live and that there was nothing else they could do. It was a difficult time, but my mother added there was something she could do “She continued in the post, which has received over 36,000 likes, 4,643 retweets, and hundreds of comments to date.

“My sister, who was always limited by the disease and tough with life, could not go away like that, as if she were dying,” she said, adding that her mother’s idea to the money was to throw a “birthday party with other children, with desserts and clowns (like any other children’s party my sister could never go to),” but they couldn’t pay it because “the disease had already consumed everything,” she said.

Her mother, who, according to Carlos Spndola, “has comedy in her veins,” wrote “a very funny sketch” and procured two clown costumes to act out the lines of dialogue; however, no one was interested in participating in her plan. “Some members of the family thought it was crazy to throw a party at such a sensitive time. I told my mother when I was eight years old that I wanted to be her assistant, and she agreed: I learned the script and remember acting very well “, the author of the story added.

“Throughout the sketch, my sister couldn’t stop laughing. And I’ll never forget how surprised she was when she realized my mom and I were the clowns. “It was a happy day, very happy, in the midst of despair,” Spndola said, adding that she died a few days later “with a smile on her lips.” “.. “Mom shared her joy of living and the dignity of life with him until the very last moment. Mom’s birthday is today. I’ve learned a lot from her, including how to love life even when it hurts, especially when it hurts “He handed down his sentence.

Carlos Spndola, who currently resides in Xalapa, Mexico, shared another photograph with his parents and late older sister “in the purest style of the 1990s” in the final ‘tweet’ of his thread. Following that, he expressed gratitude to all internet users for the “many beautiful messages” he received in response to his publication commemorating his mother’s birthday, to whom he extended “all their messages, hugs, and wishes.” “She is ecstatic: she has never received so many hugs in her life. Our family extends many hugs to you “He came to a conclusion.

Share
Facebook
Twitter
Pinterest
WhatsApp
Previous articleA Small, Terrified Dog Was Abandoned On The Side Of A Lonely Road. She Melted In The Arms Of Her Rescuer When She Realized…
Next articleBuddy, dog who was severely burned by child, now ‘fully healed’ one year later