The goal is to load as many animals as possible into a “wheelie” and help them “live the life they were meant to live.” He accomplishes this by holding fundraisers and using the proceeds to purchase wheelchairs from Walkin’ Pets. He was able to help 64 dogs, 3 cats, and a goat last year.

Cox began by running marathons while carrying a rucksack to raise awareness and funds.

Cox stated in a Walkin’ Pets video that money raised at events will “help put more and more and more wheelies on our Wheelie Warriors.”

Ruck9 and Walkin’ Pets’ relationship is described as “A True Family Relationship.”

Ruck9 features some of the Wheelie Warriors on its Facebook page in the hopes of raising awareness that help is available.

Cox was contacted about making custom wheels for two rescue dogs with underdeveloped front legs. Satchels Last Resort Animal Shelter contacted him after a friend of the owner inquired about help.

“John wasted no time in meeting with the pups to get measurements so that both dogs would be receiving wheelies!” said the shelter. Both girls (Liana and Niara) were fitted and enjoying their new life with mobility by the end of the first week of April!”

That is what Cox is all about. 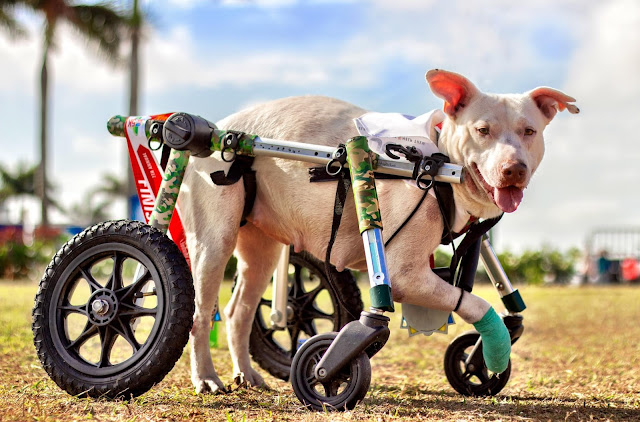 X became immobile due to spinal dysplasia shortly after he and his dad retired from the military. Cox heard their story and immediately offered to help. When Cox met him, the 11-year-old dog was being pushed around in a wagon by his dad. He posted about his experience on Facebook.

“I had absolutely NO IDEA the need for these wheelie’s would be so powerful,” he wrote.

“X spent HIS life pulling me through difficult situations, now it’s my mission to repay the favor,” Sebastian told Cox. Ruck9 bought a wheelie for X and felt honored to help the heroes.

One Wheelie Warrior is still on the hunt for his forever home. Mattie May, a 2-year-old mutt, has run several marathons with Cox. Because of her wheelie, she can run and play like any other dog. She is currently being cared for in a loving foster home. She requires an active home and does well with other dogs. Anyone interested in adopting her can learn more by visiting Suncoast Humane Society.

Don Jackson, her foster dad, stated that the wheelchair has changed her life. “She has no idea what legs are,” she said, “she can be a normal dog with it.” Someone forgot to inform her that she had them.”

Watch the video below to see how Ruck9 is changing the lives of special needs pets.