Boy, 10, sends neighbour adorable letter asking if he can walk their puppy 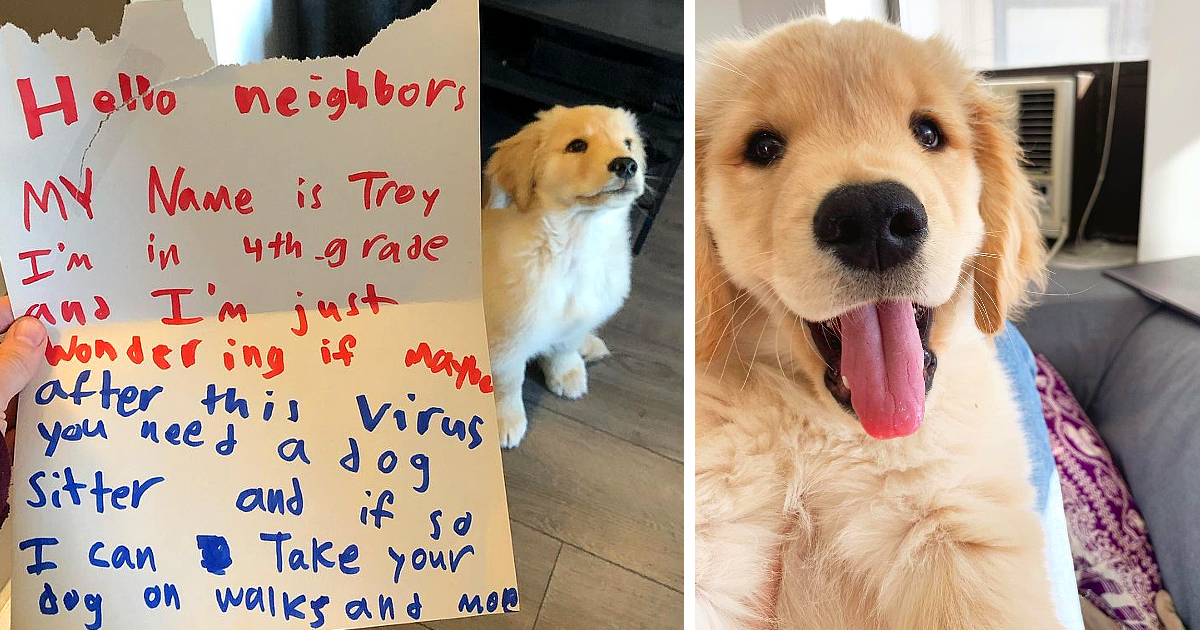 Dogs can help bring people together, especially during difficult times.

A 10-year-old boy wrote an adorable letter to his neighbour, asking if he could walk their new puppy.

Troy explains in the letter that he is in fourth grade and would gladly dog sit their new addition as needed.

“Hello, neighbour,” he wrote. Troy is my name. I’m in fourth grade, and I was wondering if you needed a dog sitter after this virus, and if so, I can take your dog on walks and do other things.”

The neighbour was so moved by the note that he decided to take it, according to The Star.

It was originally shared on Reddit in 2020, but it has recently resurfaced with over 105,000 upvotes and hundreds of positive comments.

While the majority of users praised the boy for his sweet request, others shared their own similar experiences.

“The dog has a look like it wrote the note and secretly just wants to play with the human pupper next door,” one user said.

“When we were camping in Mexico, a little girl came over with her parents and asked if she could walk one of our dogs,” another user added.

“She even wore a leash.” I asked her if she had a dog one day. ‘But if mummy dies, we might get one,’ she said.

“Her mother is allergic. Needless to say, I did not inform Mummy.”

“Troy seems like a real go-getter,” a third user said. “This kid is going places.”

It comes after an elderly neighbour wrote an adorable letter to his neighbors thanking them for allowing him to look after their dogs.

The full letter, which was shared on Reddit, begins: “Good afternoon, This letter is about your two-week vacation and how you let me babysit Smokey, Oreo, and Jennifer. I’d just like to thank you in letter.

“As you are aware, I am an elderly man. You don’t see me outside as much anymore because these joints aren’t as lively as they once were.

“On top of that, my father was diagnosed with stage four colon cancer two years ago, in the midst of the pandemic.” I was left alone in my house after he died.

“I don’t have a wife or children.” I could fall asleep and never wake up again.

“Every day is spent just sitting around wondering what I have done for this world.” That is, until I met Smokey, Oreo, and Jennifer.

“Your pets are the cutest, funniest, and most troublesome (in a good way, don’t worry, they didn’t mess up the house too much) people you’ve ever met.” They gave me the impetus to restart my life.

“I began getting up early in the mornings. For the first time in years, I started taking walks outside with your pets.

“They would bark or rub against my leg and make me laugh every 10 minutes, whenever I felt sad for a second.”

“I took them to the park, which was the highlight of their stay.” It was the most time I’d spent outside in a long time. It didn’t just bring back pet interaction; I also met new people, started talking, and made friends with a few others.

“I was overjoyed to be able to talk to friends again, interact with others, and feel like a member of the human race.”

“I know I’m sounding very existential right now, but I’m telling the truth.” It feels good to know that I’m helping someone, even if it’s just my neighbor.

“I soon after adopted two pet dogs.” (Please excuse any noises emanating from my house!) I now go to the park with them on a regular basis and talk with the friends I’ve made there.

“Anyway, I just wanted to thank you so much.” You gave my life new meaning. That is all that matters.

“Sincerely, Robert (P.S. I believe it is time for you to mow the lawn, haha!)”

Share
Facebook
Twitter
Pinterest
WhatsApp
Previous articleWith A Red Rope Around His Neck And Broken Hopes, Little Dog Awaited His Cruel Fate
Next articleMama Dog Sulked In Shelter For 400 Days After All Of Her Pups Got Adopted