He Keeps His Promise To His Dog, He Had To Leave Him In A Shelter For 4 Months But He Came Back For Him 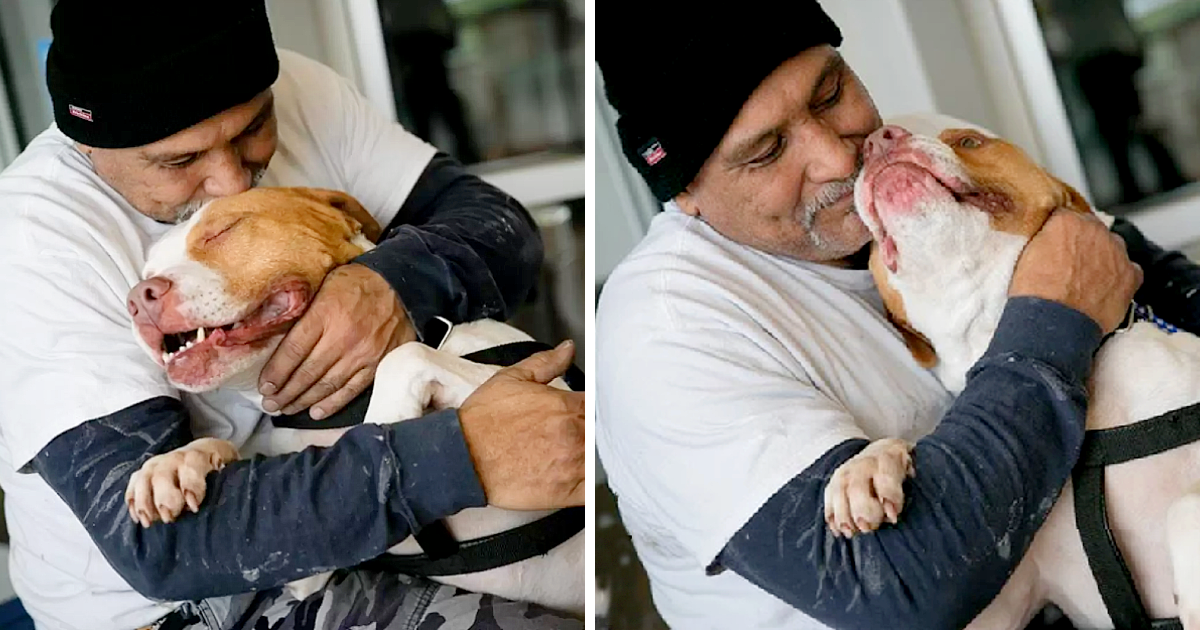 Lewis Jimenez had to do something difficult four months ago. He had to return his pit bull, Titus, to the shelter from which he had adopted him. But, unlike many people who abandon their pets and never return for them, Jimenez returned for Titus as soon as he could — and he vows never to abandon him again.

Titus was two years old when Jimenez adopted him from the Austin Animal Center, Austin’s only municipal animal shelter. He hadn’t intended to get a pit bull, but when he saw shelter volunteers walking Titus around the yard, he was smitten.

“He was jumping and happy, and I thought, ‘Man, that’s the one I want,’” Jimenez told The Dodo. 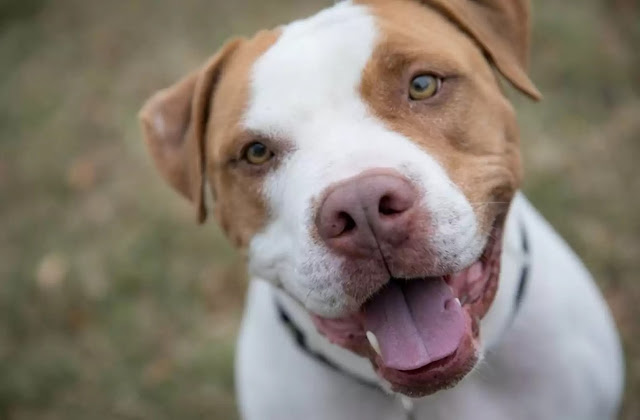 Lewis and Titus were inseparable for the next five years, and Lewis couldn’t imagine his life without Titus. Jimenez described him as “like my big old kid.” “He’s a piece of me.”

But something happened last year that drove them apart. Lewis was told that he could not keep Titus.

“The management company told him he had to get rid of Titus or he’d be evicted,” Jennifer Olohan, communications and media manager at Austin Animal Center, told The Dodo.

Jimenez didn’t have another place to live, and he didn’t know anyone who could care for Titus while he looked for another, so he had no choice but to return him to the shelter.

The shelter staff were back unsure whether Jimenez would return for Titus. “From our perspective, we can’t hold dogs because we hear owners say all the time that they’re going to come back, but then they don’t,” Olohan explained.

Simultaneously, the shelter staff witnessed Jimenez’s struggle to relinquish Titus, even though Jimenez stated that it would be temporary.

Titus, on the other hand, had a difficult time adjusting to the shelter. According to Olohan, he was downright miserable.

“The shelter is an extremely stressful place for dogs,” Olohan said. “Some dogs cope better than others, but Titus was not one of them.” He was extremely stressed. He was great when you got him out of his kennel — super playful and really sweet. But in his kennel, he was glum and sad.” 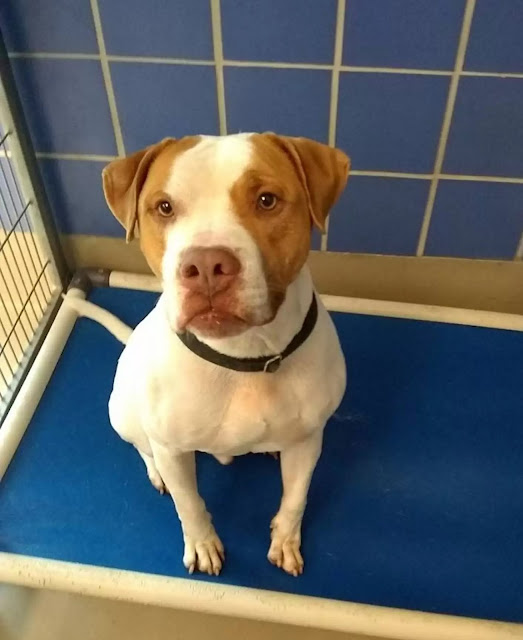 Jimenez and his family paid Titus as many visits as they could, but it was always an emotional experience for everyone involved. 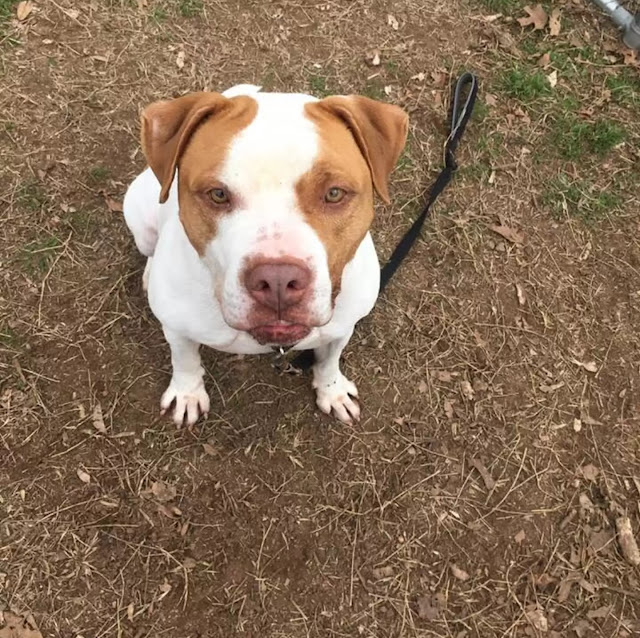 “He would become overwhelmed and very sad,” Jimenez explained. “The volunteers would jot down things like, ‘Titus isn’t himself.'” It only made me more determined to do whatever it took to get him out.”

The hardest part of each visit was coming to an end. “The staff would see them in tears as they left,” Olohan explained. “So the entire situation was heartbreaking.”

Titus stayed at the shelter for four months, but Jimenez never gave up trying to get him out.

Finally, Jimenez and his family were able to move to a place where they could keep Titus. According to Jimenez, everything worked out in the place because Titus now had a yard to play in.

“Everyone was very emotional,” Olohan said. “Titus was overjoyed, as was Lewis. There were some staff and volunteers present, and everyone was in tears. Some people were aware of their story and were aware that Lewis was waiting in the wings for Titus.” 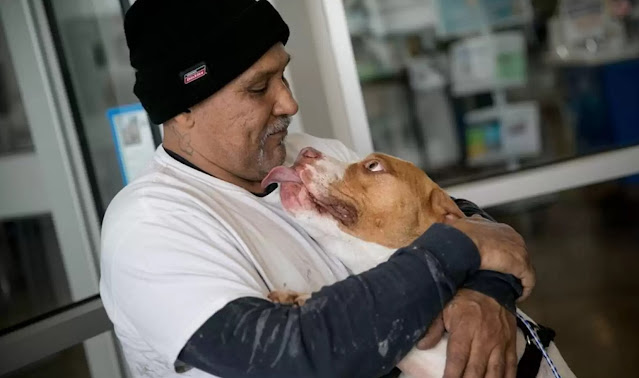 Their reunion was photographed, and the photos went viral after the Austin Animal Center shared them on its Facebook page. Jimenez is shown embracing Titus, who has a big doggy smile on his face.

“I was completely overwhelmed,” Jimenez admitted. “I was thinking about a lot of things.”

Jimenez thanked the shelter staff and volunteers for spending time with Titus and making sure he received lots of love and attention during his stay at the shelter. “They could be doing a lot of things, but by doing that, they comfort the dogs,” Jimenez explained. 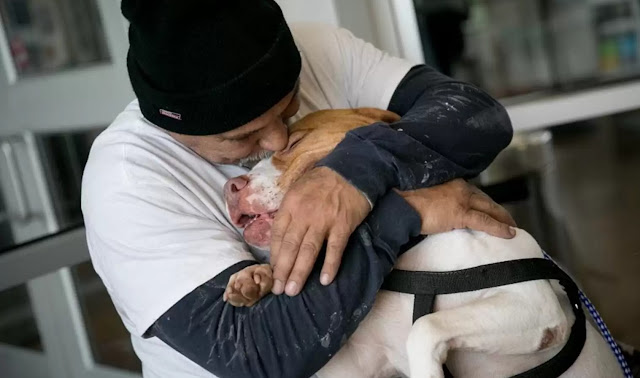 And Titus quickly returned to his life with Jimenez and his family.

“He said Titus is lounging on the couch, which he isn’t supposed to do, but they’re giving him a break because he’s had a rough time at the shelter,” Olohan explained. “But they said he’s doing fantastic.” They are happy to have him back.”

“He adores Titus,” Olohan continued. “We can see now that not returning Titus was never an option — he was doing everything he could to ensure Titus’s return.”

Share
Facebook
Twitter
Pinterest
WhatsApp
Previous articlePit bulls With The Bad Past That Brought Them Together, Snuggle Every Night While Waiting To Be Adopted
Next articleAbandoned And Malnourished Mother Dog With Her Legs Tied, Trying Hard To Protect Her Terrified Baby