A Dog Receives Honors in Australia for Saving 100 Koalas We believe it is fair to assume that most of us have heard about the Australian fires, which happened from September 2019 to March 2020 and severely impacted the country’s wildlife and flora. The fires were particularly severe in New South Wales.

The drought and the fires that happened last year are the most urgent symptoms of Australia’s climate crisis. Disasters such as fires and floods have devastated farmers’ livelihoods and caused millions of dollars in damage. 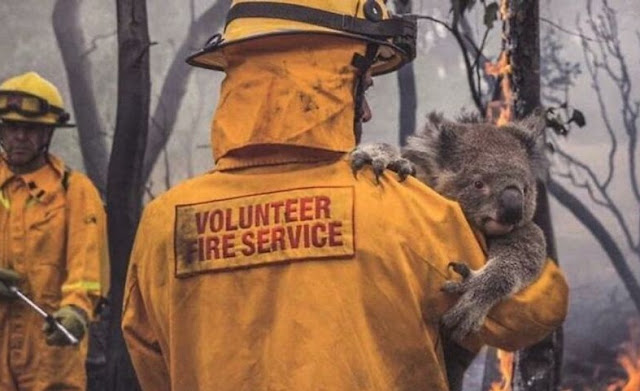 Unfortunately, due to these intense fires, a lot of animals in Australia were also either heavily injured or died. Over 60,000 wild koalas were killed during this tragedy, making them the most vulnerable. However, many of them were saved thanks to the efforts of volunteers, firefighters, and one dog in particular.

We’d like to introduce you to Bear, a dog who saved over 100 koalas during Australia’s Blacksummer bushfires.

Meet Bear, a dog who saved over 100 koalas during the Australian bushfires 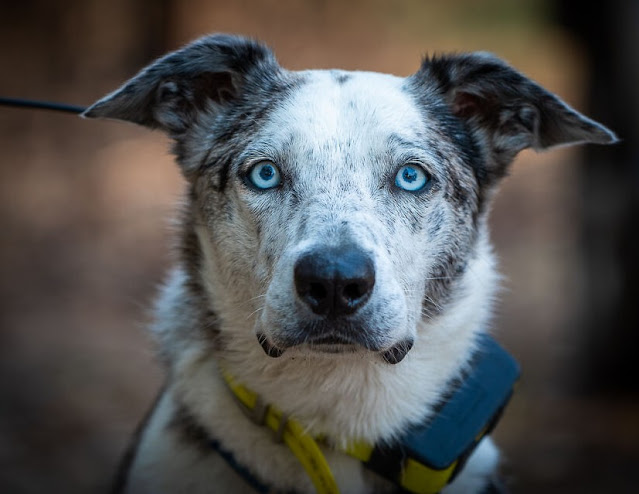 Ourpets contacted Bear’s owner and asked a few questions. First, we inquired as to whether Bear had been specifically trained to detect Koalas.

“Trained specifically for koalas. A collaboration with detection dogs for conservation at USC and IFAW—achieved with a lot of patience and perseverance.

Dogs are great partners for conservation. Their noses are invaluable and effective in helping find and collect data on species in need. It significantly reduces effort and time! And it’s a win-win situation for everyone involved—rescues are worthwhile, and as Bear demonstrated, when there’s a will, there’s a way.” 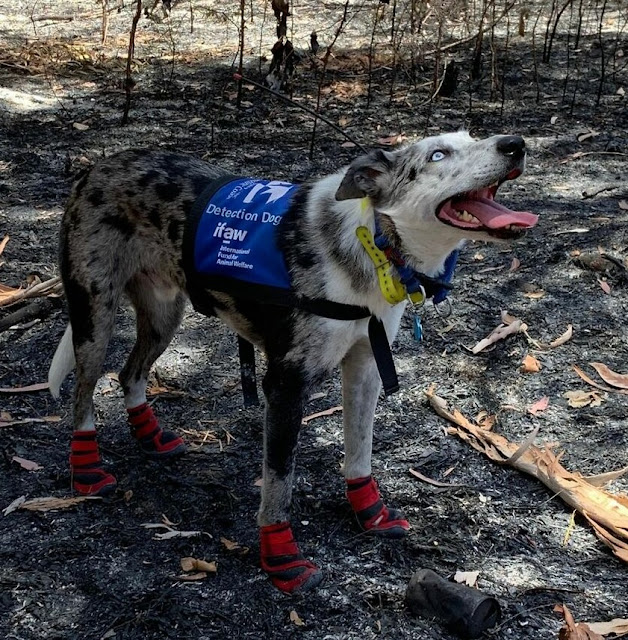 “Everyone is online now! We already had Instagram accounts for the detection dog team, but after the bushfires, everyone wanted to know more about Bear. So we use it to share information about our work with IFAW, wildlife rescue organizations, research, and daily life.”

Bear being the special dog that he is we also wanted to know what his personality was like!

“Goofy and cheeky! Bear actually is a bit of a dog with low self-confidence, but in the field he just loves life and you can see it in his big goofy face! He’s so energetic that all he wants to do all day is play! His sole focus is on obtaining his toy and engaging in play. He’ll run, do a quick drop, make a little ‘awooo’ sound, and tell you what he wants with his eyes—a toy! He needs to get some exercise or he’ll be hyper charged all day like a Duracell bunny, and he’ll let you know! He loves a pat and massage in the early morning and evening, especially on the chest. 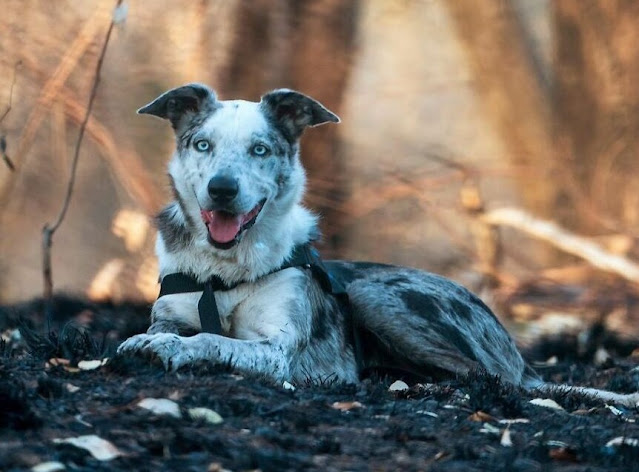 Also, weirdly, he LOVES the smell of pizza! It’s the one food he will watch you eat.”

Bear’s incredible story went viral, so we wanted to find out how the dog’s owner made about it.

“Insane! It was daunting as this was brand new to us… However, everyone loves a dog with a good story! And if we can share some joy in the midst of the devastation caused by the bushfires, it will be worthwhile.” 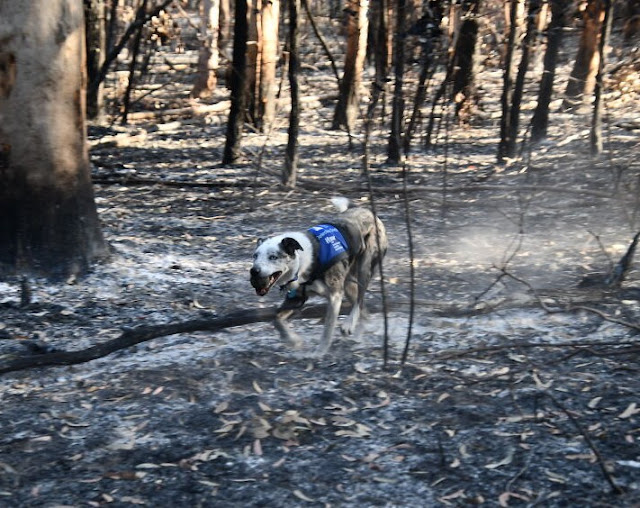 Bear seems like a lively dog, and that made us question whether his owner had any funny stories to share with us.

“While we were being interviewed, someone threw the ball behind us, and Bear with his steel focus tried to run right through one of the people being interviewed, absolutely KO’d the person—knocking them off their stool and onto the ground! Bear carried on as if nothing had happened. He’ll make a game out of it if you can throw it and he can catch it… Bear kept bringing leaves to someone to throw, and with each throw, the leaf shrank until there was only a sliver of stem left. He placed this tiny little stem stuck to his tongue in someone’s lap, only to be unable to offer it and instead leave a large wet patch on the person’s trousers. This went on for 30 minutes, and if there wasn’t another leaf left, he’d go find one.” 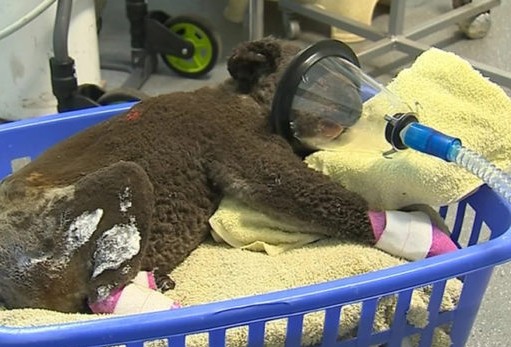 Lastly, we couldn’t help but ask what was Bear’s owner’s favorite thing about him.

“His character! Sometimes he reminds me of Sid from Ice Age, things don’t always seem switched on… But then he shifts his focus, and you can see all the cogs turning behind those eyes! One of his handlers refers to him as Dobby White Walker, a reference to Harry Potter’s elf and Game of Thrones’ white walkers’ eyes!” 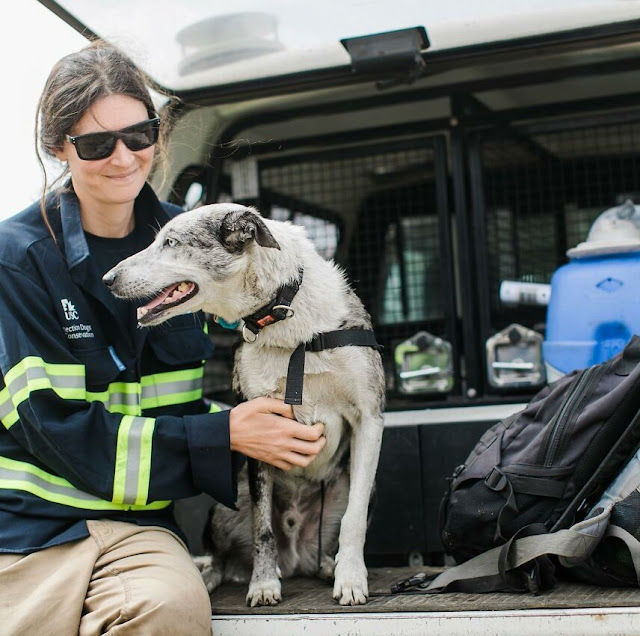 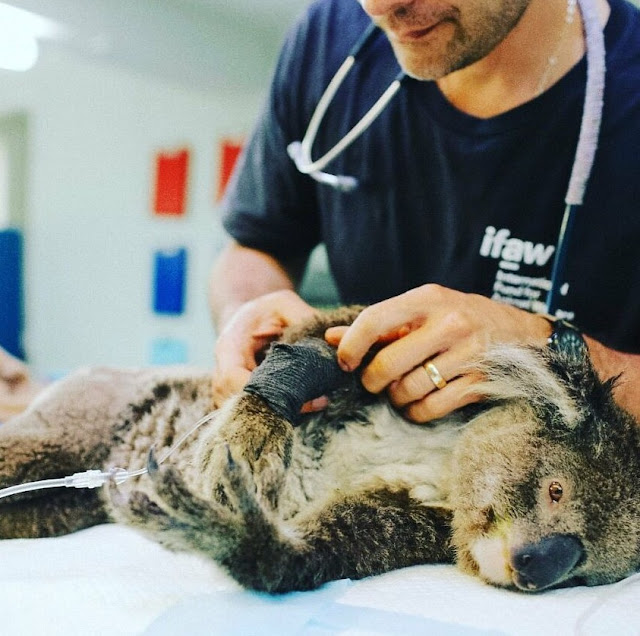 The heroic feats of the six-year-old Australian koolie earned him a gold medal. 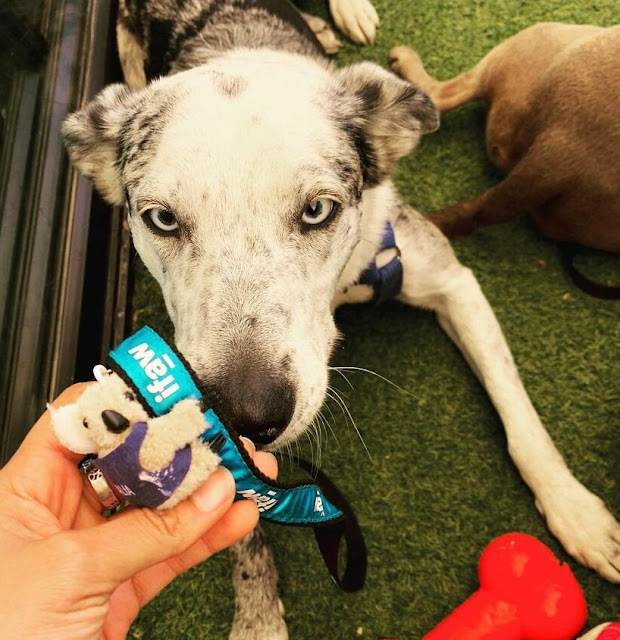 Bear also gets to wear these adorable shoes to protect his paws while investigating the areas affected by the fires. 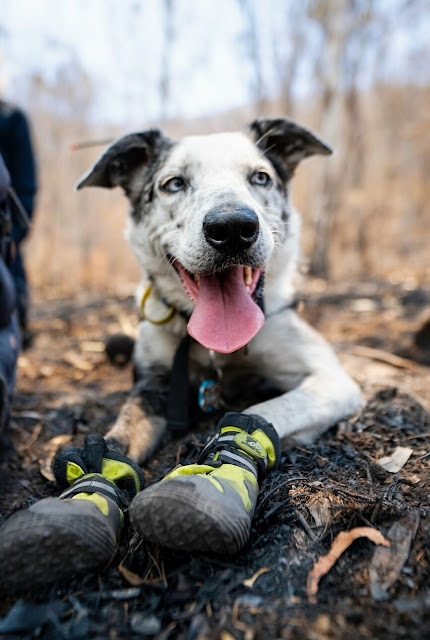 Thanks to his hard work, a lot of koalas were saved, and extra pets and play time were provided as an additional award for the good boy 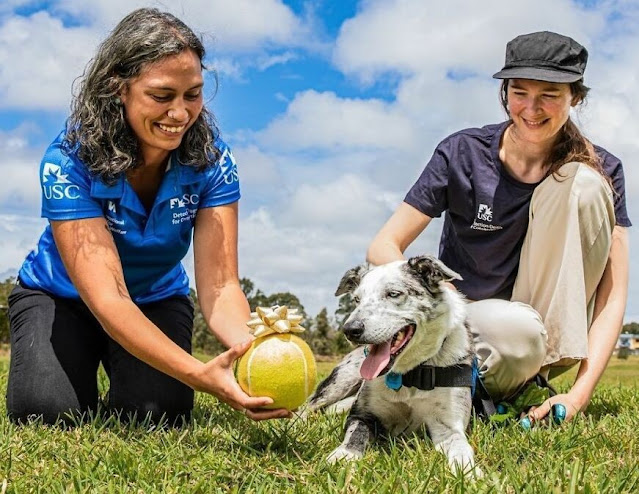 Below is a PBS video of Bear at work…

Share
Facebook
Twitter
Pinterest
WhatsApp
Previous articleOld Beggar Passed Away, But This Stray Dog Still Goes Find Food For His Close Friend
Next articleMan ‘steals’ neighbor’s dog to save animal from abuse and neglect, “I’d rather go to jail than see him die.”