People Give Her dirty looks, ‘Scary-Looking’ Pit Bull Wears Propeller Hat To Help Her Get Adopted 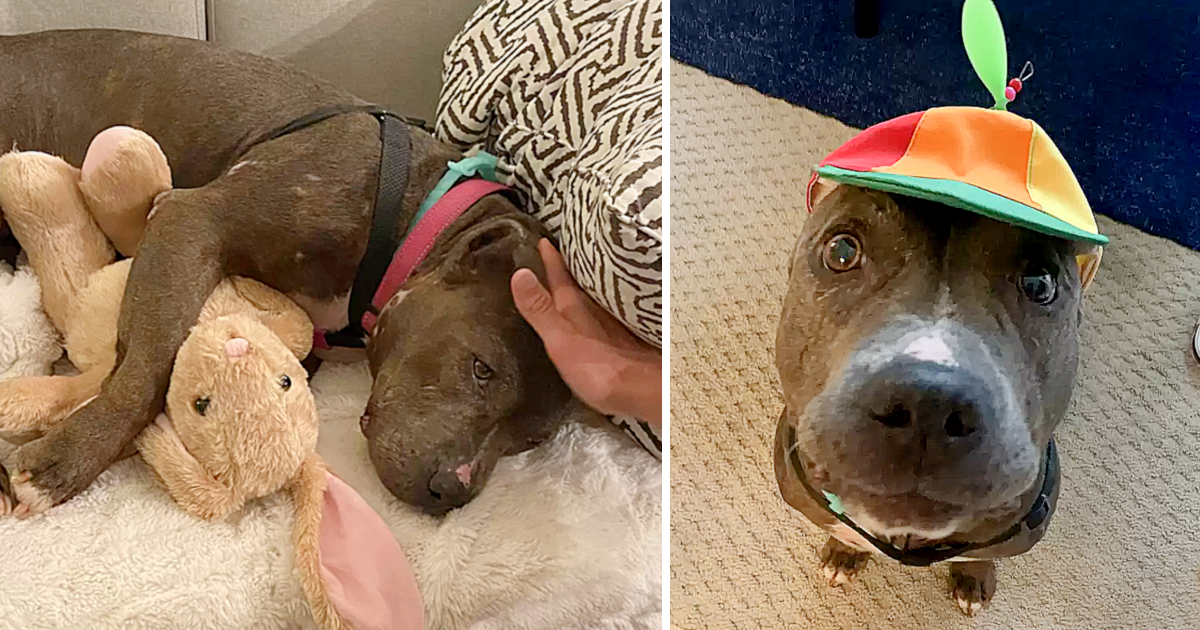 Bonnie was rescued from a local shelter only five minutes before she was scheduled to be put down by Grandma Betty’s Animal Rescue. Something in her big brown eyes told them she was the sweetest dog ever, and all she needed was a chance to show it, and they were completely correct.

Lili Follett stepped up to foster Bonnie not long after she was rescued, and she quickly fell madly in love with the adorable pittie.

Follett told The Dodo, “She is the sweetest, most loyal dog I’ve ever met.” “She enjoys meeting new people and is extremely trusting.” She’ll immediately rest her head on your lap… She would follow me around my apartment like a little duckling, never leaving my side no matter what I was doing! Every morning, she would wait for me to wake up and walk over to me to get her morning pets. If I didn’t pet her long enough, she would get even closer to me until I did!”

Follett knew that any family would be lucky to adopt Bonnie, so she set out to find the perfect match for her, but was met with a lot of fear and misunderstanding.

“Before the hat, most people gave us dirty looks and purposefully stepped off the sidewalk to walk around us, rather than just walking past us,” Follett explained. “When they saw her, most people were visibly nervous or unsettled.” Seeing how people reacted to her made me realize that she would never be adopted unless something drastic changed.”

Bonnie is the sweetest dog in town, but a lot of people can’t see it, so Follett devised a plan.

Follett bought Bonnie a propeller hat to make her more approachable and to alleviate people’s misplaced fears. After all, who could be afraid of a dog wearing a propeller hat? Bonnie enjoyed wearing the hat, so Follett began dressing her in it, and the difference in people’s reactions to her was almost immediate.

“When people see Bonnie wearing the hat, they smile, laugh, and definitely try to interact with her a lot more,” Follett explained. “Almost every time I take her for a walk, cars slow down to yell out their windows about how cute she is.” Parents are more willing to allow their children to interact with Bonnie. Significantly more people stopped us and asked to pet her, which allowed me to start a great conversation about fostering and adopting dogs.”

Bonnie is the same dog whether she’s wearing her propeller hat or not, but the hat helps people see past the false stereotypes about pit bulls and get to know the sweet dog beneath it.

Follet went above and beyond to ensure that people saw Bonnie for who she truly is. She hoped the propeller hat would find her in finding the ideal forever home, and it did.

After Bonnie’s propeller hat went viral on TikTok, someone saw her story and decided to adopt her. Bonnie has returned to Grandma Betty’s Animal Rescue and is awaiting transport to her new home in Virginia. It’s the best ending anyone could have hoped for, and Bonnie can’t wait to settle in with her new family — and go for walks in her new neighborhood, of course, while wearing her propeller hat.

You can follow Bonnie and other foster dogs on TikTok.

@lili_nicole_ this trend except I’m picturing @noelle sing the whole time I was making it. 🔗 in bio to donate to Bonnie’s rescue for her vet bills ❤️ #pittiesoftiktok #staffysoftiktok #cutea ♬ original sound – Max and Cali